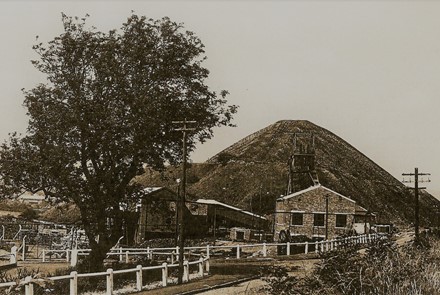 A mining community was established in Twechar in the 1860s with the sinking of two main pits, Twechar and Gartshore, by the somewhat infamous William Baird & Co. The village developed as a result of its position at the northern limit of the vast Lanarkshire coalfield, with 12 shafts eventually being sunk. Mining continued in Twechar until the 1960s, and miners from the area then travelled to other local pits until the closures which followed the miners’ strike of 1984-5. While much of Twechar’s history is typical of the situation across Scotland, there is also much that is unique. Baird’s had their huge headquarters here, which trained apprentices and contained workshops for most of the trades that manufactured and supplied the whole organisation. Those trades included engineering, blacksmithing, joinery, electricians, painters, slaters, chimney sweeps and transport. To increase transport speed and efficiency, Baird’s created their own railway network that spread out from Twechar across Lanarkshire. Notably, the Bevin Boys came here, from across the whole of Scotland, to learn about mining in a training pit that was linked to the local school. Through the housing that was made available for miners, managers, and the administrative and clerical staff, the village was and still is a microcosm of the social class system of its day.

Whilst there is a commonality of cultural traditions and social conditions in coal mining communities across Scotland, Twechar was distinctive because it was home to the headquarters of one of the largest mining companies working in the Lanarkshire coalfield, and because it employed a huge number of people across a wide diversity of trades, which is not typical of most mining villages. However, when the industry that utilised all these skills suddenly disappeared, the resulting mass unemployment is shared with mining communities throughout Scotland and many parts of the UK.

Small scale coal mining has existed in Scotland since the 12th century, though it was James Watt’s development of the steam engine, in the 18th century, that boosted demand for coal and accelerated moves towards industrialisation. Together with other railway and industry developments in the 19th century, the demand for coal further increased, which eventually led to the exhaustion of shallow seams and necessitated extraction from deeper deposits.

It was not unusual to find whole families working down the pit. Hewers were the most skilled workers and were paid by the amount of coal carried to the surface. They often paid their wives and children to carry the coal to the pit top so that they could concentrate on digging it out. Everyone who worked in the pits laboured hard and worked long hours. The Mines Act of 1842 ostensibly put an end to women and children under the age of 10 from working under ground and introduced the first pit inspectors. Yet mining remained a notoriously dangerous occupation and fatalities, injuries and dust-related diseases were not uncommon.

Mining provided common employment throughout East Dunbartonshire, where mines extended from Baljaffray in the west, to Twechar in the east. Coal was the most common mineral extracted locally, but limestone and ironstone were also extensively mined, and the presence of alum shale led to the building of a chemical processing works at Campsie to process the alum for use in the textile industry. The 'Secret Works', as it was known, was a major employer in Lennoxtown for most of the nineteenth century.

Early mines followed an angled seam from its protrusion on the surface; miners then excavated the mineral seams at progressively deeper locations. Perpendicular pit shafts were also sunk from an early date, with crude winding mechanisms used to lift the elements to the surface. Modern collieries were established during the second half of the nineteenth century, some of them employing many hundreds of men.

The most important coal-owner was the firm of William Baird & Company, which came to the Twechar area about 1860 and developed extensive mining operations to supply coal and coke to its Gartsherrie iron-smelting works at Coatbridge.

Twechar’s proximity to the Forth and Clyde Canal, as well as the abundant seams of coal, were also key factors in Baird’s decision to sink pits in the area. Twechar No.1 Pit, was sunk on the north bank of the canal, to the east of Twechar Bridge, with 12 shafts eventually being sunk. With the arrival of Baird’s and due to its location at the northern limit of the vast Lanarkshire coalfield, a mining community was firmly established in Twechar.

While much of Twechar’s history is typical of the situation across Scotland, there is also much that is distinctive. Baird’s established their huge headquarters here, which trained apprentices and contained workshops for most of the tradesmen that manufactured, maintained and repaired supplies for the whole organisation. Those trades included engineers, blacksmiths, joiners, electricians, painters, slaters, chimney sweeps and transport workers. Notably, the Bevin Boys came here during WWII, from across the whole of Scotland, to learn about mining in a training pit that was linked to the local school.

Despite bringing much employment to the area, Baird’s was very much disliked by mining communities, who deplored its treatment of workers and their families, particularly when those folk fell on hard times. The animosity towards Baird’s continues to this day, even though the National Coal Board took over all the pits in 1947, and was perhaps most noticeably observed when Twechar folk petitioned hard against plans to name a village street after William Baird.

Nonetheless, industrialised mining activity continued in and around Twechar for almost a century. Twechar No.1 Pit closed in 1964, while Gartshore 9/11, the very last colliery in the area, was shut in 1968. Following this closure some Twechar men travelled each day to collieries such as Bedlay and Cardowan in Lanarkshire, until those pits, too, were closed, during the early 1980s.

Many reminders of the mining industry can be seen today, from bings (spoil heaps) to fenced-off shafts. Unfortunately, subsidence of the ground above former mine workings sometimes occurs, as at Grampian Way, Bearsden, in 1982, when a huge hole appeared in the ground above a former mining works.