Mining communities in the UK had rich footballing traditions dating back to the 19th century. These provided much sought physical exercise, entertainment and community funding for the miners and their families in these towns and villages. In Scotland, the sport was so popular that many of the outstanding football managers and players of the 20th century hailed from Scottish mining communities. Famous Liverpool manager, Bill Shankly, is said to have also possessed a natural sense of socialism as a result of growing up in a community where people had to look after each other in the face of great adversity. He encouraged players to help each other out if they noticed one of their number was having a bad day’s play. The now deserted town of Glenbuck, in Ayrshire, is a place of pilgrimage for many Liverpool fans, as it was the birthplace and some time workplace of Shankly, their saviour manager. The village team the ‘Cherry pickers’, which had a similar population to Twechar (never more than 1700 people), produced 50 professional footballers, including six Scotland internationals and four FA cup winners. This has been said to be the equivalent, per head of population, of a minor non-league team in London producing 250,000 professional players.

The football teams that were attached to mining towns in Scotland in the 19th and 20th centuries, in various leagues, including juvenile, junior and professional teams, are too numerous to mention. Here our respondent Robert Hardie (born 1938) mentions one of the four Twechar teams (Twechar Rovers, Twechar United, Twechar Thistle and Twechar Rangers) that were in existence at various times over the last couple of centuries in junior and juvenile leagues. He talks about Twechar Rovers, in relation to another of the greats of football management – this one hailed from the mining community of Orbison, near Bellshill in Lanarkshire – the now legendary Matt Busby. A man who, amongst many other achievements and bold innovations throughout his career, had the grit and courage to rebuild a winning team at Manchester United after the tragic loss of eight of his young ‘Busby Babes’ in the Munich Disaster of 1958. Busby was so badly injured in the horrific plane crash that he was hospitalised for nine weeks, during which he was read the last rites twice. Robert knew all about Busby’s exploits but he was amazed to learn of his own mum’s connection to the footballing giant:

Photo:
“In that photo, you can see my mum, and Matt Busby, standing - and my mum was taller than Matt Busby! I doubt if he’s maybe 20 at that time…and I used tae say tae ma mum and dad, “Did he play with Twechar?”, and sometimes he got a game wi Twechar, but he was always down in Twechar…and then he went and played with… well, my mum told me and my dad - he played wi Dun pace Juniors - the place he started his football career…and he always came down from Bellshill, every weekend.”

Robert is not sure why Matt Busby visited his mother’s family and regrets that he did not ask his mother. Nonetheless, Robert’s photograph and testimony is proof of one of Twechar’s many impressive footballing connections. What he does give us a clearer picture of, in the following extract, is of the league system that existed in Scottish football when he was a young man. He also gives us the names of some of Twechar and the surrounding area’s talented footballers of the past:

“Well, ah was a football man…used tae play football…played for the school team…and you left school and you played for the youth club then, that was under 15s and 16s. Then you could go fae there tae play juvenile football, then amateur football and senior football. There was quite a lot of good footballers in Twechar, away back then. I didnae actually play senior football or junior but I played the fitba junior trials. I was well known in amateur ranks aboot the area, but there was quite a lot of people in the village, there was great footballers in Twechar. A few names I could give you and they were all really good football players, that’s   going back to when I was a young boy. You’re on about football, that’s one oh ma topics, that and politics, and I’m going way back to a team called Twechar Rovers. They played down what they called the Kelvinbridge park, and we used to walk down there in summertimes tae watch the playing through the week and on a Saturday. They used tae work in the pit, they worked a Saturday morning in the pit. It was a 5 and a half-day week then, that was tae try and get a good wage. That was them out of a Saturday morning, coming home at 12 o’clock, half past 12 - 1 o’clock, and they’re away playing football way back then. And   Twechar was full of brilliant football players, no just Twechar but round about Twechar, Kirky, Kilsyth, Croy and aw they places was full of football players….and quite a lot of football players went senior.  Ma brother was one o’ them. He played with Third Lanark. He played about 2, 3-year wi Third Lanark. Ma brother, Wullie Hardie, and my friend, Duncan MacFarlane - he played wi Airdrie. There was another fella, Don Glover, he played with Kilsyth Rangers and he played with Dumbarton. Other ones I can remember, John Bryden, played wi Twechar and he played wi Kilsyth Rangers and he played wi Stirling Albion. And maybe going further back than that - Martin Conroy, that’s going back to the early ‘50s. Martin played wi East Stirling, and there were others who didnae make the grade were good     footballers - a boy called Tommy Cowie, and all them. The place was what you would call   hoachin wi footballers. Twechar, Kirkintilloch and all that…. coz that was, likes of where we are just now (The Healthy Living and Enterprise Centre), the likes o’ they parks oot there…. you couldnae get moving for them. See in the summertime, you came home fae the pit, got your dinner, maybe rest for an oor - let your dinner go doon. Go doon the fitba park. You couldnae see the grass for fitba players, the ones playing fitba. That was oor entertainment…. That was how there was so many good footballers.”
Robert Hardie

That mining communities produced players and managers in copious numbers is without doubt and, as we have seen, Twechar was no exception. What brought this football culture to these communities, in the first place, is less clear. Some theories have it that football was brought in to mining communities by middle class evangelists, football having been a mainly middle-class pursuit at the beginning of the 19th century. Others suggest that it was spread with the frequent migration of miners to other mining towns out of economic necessity. This is thought to have happened, for example, to the Fife town of Cowdenbeath, with the migration of Cumnock miners to the town.

What sustained the passion for and participation in football in these communities is perhaps more clear. It is certainly the case that Baird & Co., who owned the mines in Twechar, funded football grounds in their coal and steel towns and that other companies did similar things. Baird’s did this, some would argue, as a way to spread their protestant religious views and as a means to try and control the population. The name of one of the Twechar teams, ‘Twechar Rangers’, points to this religious bent and a newspaper article from the 1920s demonstrates this team’s involvement with the miners’ institute in the village, which was also built by Baird’s. It is thought that these attempts by Baird to be evangelical and to placate the population were widely ignored. However, football teams being linked to miners’ institutes was certainly a way in which the community could benefit from football. The teams were often involved in raising funds for the community and this helped sustain engagement with the local teams.

This enthusiasm for ‘glorious game’ grew partly from the fact that mining towns and industrial towns in general had good transport links, in the form of railways and canals, which meant that they were placed most favourably to sustain football teams as there was relatively easy access for supporters and players. The advent of cheap newspapers in the mid nineteenth century further promoted the game as it meant that people in these towns and villages could read about the fortunes of their teams. Most importantly, the introduction of the half day Saturday holiday meant that men had free time to play and to support teams. The creation of the new junior and juvenile leagues grew out of these circumstances and encouraged community loyalties to the many local teams that emerged.

What is clear is that miners were ideally suited for the game of football. It has been said that miners at play differed little from miners at work. Qualities such as independence, willingness to stand up for their rights and the maturity to accept the consequences of their actions all stood them in good stead. They were often also very motivated to find new lives outside of the pits. Jock Stein, the famous Celtic manager, who was a miner until he was 27 years old in the Lanarkshire pits and who had men die beside him in the pit, talked about the push of working in the pits and how this inspired men to become footballers: “You don’t want to be underground all your life”.

What is also abundantly clear is that miners, in general, enjoyed playing football, during their fleeting spare time, to let off steam and enjoy the fresh air. This is clear from the observations of our respondent Robert Hardie, about football pitches full of men just finished their work. Our respondent Robert Douglas (born 1924) who played with juvenile team Twechar Rovers, remembers miners rushing from the end of their shift to play football in a time before the introduction of the pithead baths:

“Twechar miners, nearly aww the miners, we seen them - they used tae come up the pit, straight doon the park - the park’s doon by the canal. They came doon there. Up the pit, no even washed, oot in the park, black faces and everything, playing fitba.”
Robert Douglas 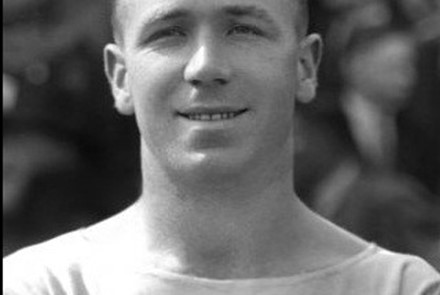 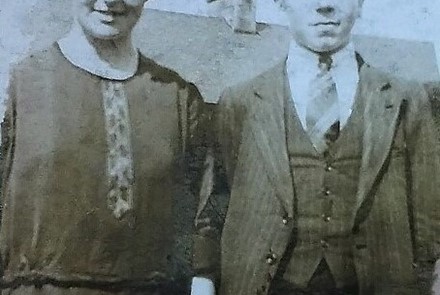 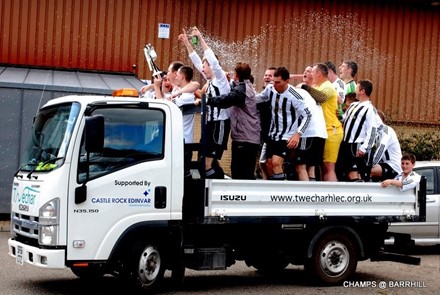