The village of Twechar had its beginnings in a gathering of homes on the incline of Barrhill. These residences housed weavers, farmers, coke workers and canal workers.

In around 1860, when the pits were sunk by Baird & Co. in Twechar and the surrounding area, there was a migration into Twechar, with people coming mainly from the county of Lanarkshire where Baird owned most of the mines. This created a need for new housing to be built to accommodate the new families. This came in the form of a miners’ row, which was built by Baird’s along the south bank of the Forth and Clyde Canal. This series of constructions was called ‘Twechar Row’ and was made up of 35 dwelling places. These miners’ cottages had two rooms, each with a large coal fire for warmth and cooking purposes and they were lit by means of paraffin lamps. Water was obtained from a communal pump outside the cottages and toilets were also in outside buildings. Sleeping facilities came in the form of two bed recesses in each room, with hurly beds (boards that could slide under the other beds) for large families. This row was demolished in 1925 due to its poor conditions. John Andrews describes the sleeping accommodation in these rows:

“My mother was born in Twechar. She was born in Twechar rows. There was a canal row running parallel with the canal in Twechar. There were about 35 miners’ cottages there of 2 rooms. The front room, that’s the main            room, had two bed spaces. The bedroom had two bed spaces with a curtain across. A lot of the families that had large family had what they called hurly beds. It was boards on wheels and with the family, if there was not room        in the beds they pushed them under the beds.”

As well as the canal side rows described by Mr Andrews, above, there were also some beside the canal at Shirva Road. Seven of these were used as office and accommodation during the time of the existence of The Yard workplace in Twechar. We have it anecdotally that some of these rows were still being used as dwellings in 1904, as the famous Celtic goalkeeper Charlie Shaw is said to have been born there. It is unclear when these were built.

When new pits and workshops opened later in the century Baird’s were required to build further miners rows in Twechar. The initial four rows were completed around 1880 and two more rows were added in 1900. In total, there were 160 abodes. The first of the rows, which ran at right angles to the main road, was given the local name of the 'Store Rows’, as at the top part of the row the Gartsherrie co-op was situated along with the local public house. The further five rows were made up of single and double storey rows. With six exceptions, these houses were made up of two rooms with recess beds in each room. They had ranges for cooking and warmth and were initially lit by paraffin lamps. These rows had communal outdoor washing and toilet facilities. The rows were demolished in 1957 when enough modern houses were built by the local council.

Much larger houses in Barrhill Road and Barrhill Terrace were built between 1890 and 1910 to accommodate the managerial staff of Baird’s. The grandest of these is the red sandstone, five bedroom ‘Glenshirva’, which was built to house Captain Buchanan, Baird’s general manager.

In 1925, with increasing population demands, Baird’s built what were colloquially known as ‘the new hooses’. There were 200 dwellings in total, with the majority y being two-apartment and some three-apartment houses. The houses were set up to take electric lighting (which came four years later) and were kitted out with indoor toilets and bathrooms. The scheme comprised Burnbrae, Windy Yeats, Whitelaw Terrace, Merryflats, Shirva Lea, Annieston and Sunnyhill, and was passed into the hands of the council in 1968 when mining came to an end in Twechar. The scheme was modernised over the years and was demolished (starting in 2014) to make way for new social and private housing. Respondent Jessie Johnston, talks about her family moving back from the “new hooses” to the miners’ rows:

MacDonald Crescent was built in 1939 by the county council and was made up of the first houses that were not built by Baird. It comprised 48 houses that were larger than the Baird’s houses and had modern facilities and electricity. More council houses were built by Dunbartonshire county council at Alexander Avenue (1948), Kelvin View (about 1955) and Davidson Crescent (c.1965/1966). All these houses, other than the three that blew up in a 1970 gas explosion (which had no casualties), are still standing.

An award winning affordable housing development is currently underway in Twechar; it is named Roman Fields, built by Places for People and Castlerock Edinvar Housing Association. These are the first new buildings since the prefabs of the 1950s. There are 1, 2 and 3 bedroom properties for social rent, shared equity and outright sale. The plot comprises 2 and 3 bedroom semi-detached houses which are energy efficient and said to have a traditional feel. The building continues with the hope of increasing Twechar’s population to over 2000 people. This is hoped to bring, amongst other benefits, an improved bus service to the area. The development also has the aim of bringing improved housing for the elderly and the disabled to Twechar. 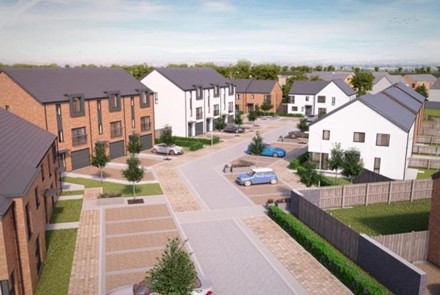